skip to main | skip to sidebar

Hi folks,
It's been nearly four years since I officially started AFE, and I've got some good news. First of all, if you've followed the site at all over the past few years, you know I'm terrible at updating regularly. I won't get into the reasons, but as of a few weeks ago I've made some personal changes which will allow me to commit to regular updates. That means a new strip every Thursday, and occasional updates at other times in the week. I'm trying to work up to two a week but I can't promise that yet, so let's just agree on Thursdays, OK?
In other news I'd like to announce that there will be a change in layout. I've had basically the same layout since 2006, and I think I can manage with a newer look. It won't be anything major, no new ads or style shifts. I'm just going to streamline the news section at the bottom of the archived pages, and probably add "intro" and "help" pages. That means when you type in the URL you will no longer land on the latest comic, but instead go to a grid of recent updates. I know this sounds effed up, but trust me, it'll be fine. My main reason for doing this is to make it easier for visitors to see what they've missed, and make internal navigation easier. In the past I've found the breakdown between main strip updates and the "other" section to be a little clunky, and I'd hate for you to miss any new pages I put up. You'd hate to miss them, too. Also, I'm hoping to attract some new readers and I want them to feel right at home when they get here. I'm going to put up a picture of coffee and donut holes, and the word "free".
Lastly, in webcomics news, I went to Webcomics Weekend 2. It was put together by the real-life people from TopatoCo in Easthampton, MA. They put on a really great show in their huge old mill building, and it was swell to see some of the faces behind the art. I got a chance to meet some insanely talented creators, play with toys I can't afford, and laugh and laugh and laugh. I was also lucky enough to meet Ryan North, whose webcomic was what made me want to start my own site way back when. Ryan is the author of Dinosaur Comics, and he also started the advertising program Project Wonderful, both of which were really nice things to do. Although, I must say, I had expected him to be taller. He's only about 6' 8". How tall is T-Rex? Like a hundred feet? Is that something anyone can even answer? Anyhow, forget I mentioned it. Great times last weekend in Easthampton. 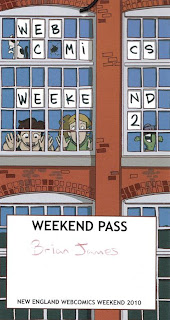